Restless Legs Syndrome: What you need to know 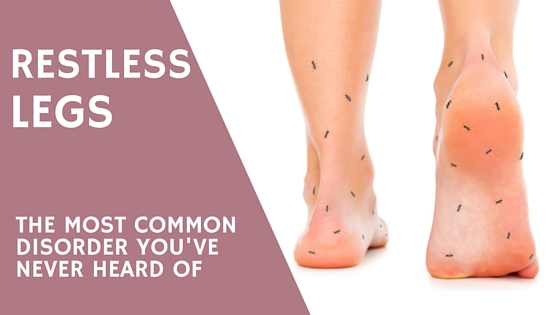 Irresistible desire to move your legs?

Feel like there’s a creepy, crawly, bubbly-like caterpillar convention going on under your skin?

Does it come on when you’re inactive but improves when you move?

Is it worse in the afternoon or at night?

Is it disturbing your sleep?

If you answered yes to these questions then you are displaying the key clinical symptoms of Restless Legs Syndrome 1.

Why haven’t I heard about restless legs syndrome?

Even though this condition is estimated to be experienced by between 6-13% of the adult population and has been described in the medical literature from at least 1672 it has only been widely recognised as a disorder in the last 20 or so years 2.

Restless Legs Syndrome is a nervous system disorder that impacts both the sensory (feeling) and the motor (movement) part of the nervous system leading to insomnia and daytime sleepiness 3.

Females are twice as likely to experience Restless Legs Syndrome compared to males and up to 26% percent of pregnant women suffer from it , however, it usually resolves one month post-partum. It is less common in younger populations and most sufferers present between 40-60 years old 4.

Restless Legs Syndrome is considered to be a chronic condition that may show a relapsing/remitting pattern, however it generally worsens with age 2.

There are two classifications:

Has a strong genetic component and sufferers will usually have a positive family history of Restless Legs Syndrome or develop symptoms at a younger age.

Restless Legs Syndrome can develop as a consequence of other physiological changes in the body. Conditions related to this include:

(In addition to the key symptoms noted in the first paragraph)

As with many conditions affecting the nervous system the cause of Restless Legs Sydnrome is has still not been fully explained however, one of the key areas of study involves the neurotransmitter, dopamine. In short, dopamine has a role in movement, mood, memory and motivation.

Researchers have noticed that people suffering with Restless Legs Syndrome have a decrease in dopamine (D2) receptors in the striatum of the brain, along with an increase of tyrosine hydroxylase, which is the enzyme responsible for converting the amino acid tyrosine to dopamine. This enzyme is reliant on iron (as well as folate, copper and B vitamins) to make this conversion and Restless Legs Syndrome sufferers have been found to have lower levels of ferritin, (<50mcg/dL), the storage form of iron. Serum iron levels are often in range so these people do not present with classic iron deficiency anemia. However low ferritin levels seem to impact on the synthesis of dopamine and the availability of receptors in the brain.

The key role of the striatum is to promote or inhibit voluntary movement hence why dysfunctions in this area cause disorders relating to movement (Parkinson’s, Huntington’s Disease and Restless Legs Syndrome) 3,4.

The fact the it symptoms occur in the afternoon evening also supports this hypothesis as dopamine demonstrates circadian fluctuations 5.

This condition has a large impact on a person’s quality of life. Due to the inability to remain still for long periods of time airplane travel and social activities such as attending the movies or theatre may be unbearable. Without doubt though, the biggest impact is on the reduction in quantity and quality of sleep. This results in fatigue, poor concentration, reduced short term memory, increased likelihood heart disease, hypertension, diabetes, reduced immune function and mood disorders 5.

80% of people with Restless Legs Syndrome also experience periodic limb movements of sleep. These repetitive flexion movements in the legs last between 0.5-5 secs and occur at intervals of 20-40 seconds. This further disrupts sleep exacerbating the issues above 1.

There is no biochemical test for Restless Legs Syndrome and diagnosis is made by a detailed clinical history, physical and neurological examination 4.

Pharmaceutical treatment options use either single or combination treatment from dopaminergic drugs such as levodopa, opioids, benzodiazepines and anti-epileptics. The dopaminergic agents have been shown to be effective however some patients will experience a morning dopamine “rebound” and symptoms spreading to other body parts 2,4.

Due to iron’s role in dopamine production and regulation, iron supplementation to raise ferritin levels may be of benefit in secondary Restless Legs Sydnrome. Iron supplementation should only be taken under the care of a qualified health professional to ensure the suitability and correct dosage, as too much iron can also be detrimental to health. Investigations of the underlying cause of the low iron should also be a priority 3.

The symptoms of Restless Leg Syndrome are worse in the presence of magnesium and folate deficiencies. Primary Restless Legs Syndrome patients have shown benefit with folate supplementation 2.

Valerian is well known for treating insomnia and in Restless Legs Syndrome it reduces the severity of symptoms by increasing the amount to deep, refreshing sleep 7.

This herb is key in treating many female reproductive health issues and researchers are also exploring if its actions on dopamine receptors in the brain can benefit Restless Legs Syndrome. A pilot study of 12 people with moderate to severe symptoms, who had also been on dopaminergic pharmaceuticals, were able to reduce the dosage after Chaste Tree treatment8 .

Restless Legs Syndrome is a condition that can have a huge impact on quality of life in addition to the health consequences from chronic poor sleep.

There are many factors contributing to this condition so it is worthwhile working closely with both your medical and complementary healthcare professionals to get the right combination of treatment for you.

If you suffer from Restless Legs Syndrome and have tried any other treatments that worked I’d love to hear about them so please leave me a comment below.

Why do I wake up early in the morning?

Norelle Hentschel is a degree qualified Naturopath and operates a clinic in Crows Nest, North Sydney.  She enjoys helping people reach their optimal health and has a special interest in sleep disorders, natural menopause and digestive health.

Want more articles like this? Receive a monthly digest of natural health information to help you become “health” sufficient!

P.S. Your inbox real estate is precious, and we will never annoy you with sales pitches or share your details with anyone else. One email a month — that’s it!